I have watched all the films, but I was never really "in" to Star Wars as a child. I just didn't like Sci-fi much. I'm slowly getting more into the genre now (with Doctor Who) but I don't know if that's in the same "league" as Star Wars(?) Maybe? So excuse my inaccuracies!!! (My friend who's a BIG-TIME fan of Star Wars says my Yoda is inaccurate as he only has a lightsaber in the newer films, as supposed to all the other characters drawn are from the older films...) :P Oh well.

Quickly drawn in pencil and coloured with Copic marker pens. 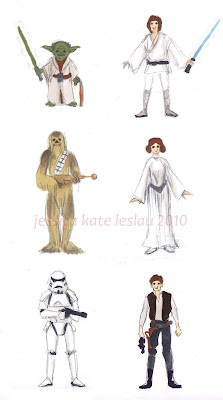 My mum told me that her friend's son absolutely loved it though. Which I was happy about :) But now his younger sister wants me to draw her some Disney characters for her!! Better get to work again then!
Posted by jessica kate leslau at 00:26 No comments:

I went to Disneyland Paris over the weekend. We (quite literally) had the whole of Saturday at the park. It was fantastically knackering. 12 whole hours at the park, my friend and I deserved a medal!!

I didn't have time to draw whilst at the park, so the next day (on the coach coming back) I decided to sketch some things I remembered in particular from my day there. The people I drew really stuck in my mind, (some comically, and some aesthetically speaking). 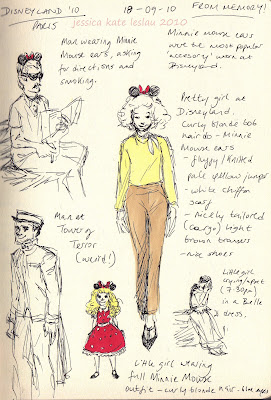 I've written notes beside each drawing to explain why I had remembered and drawn them. My writing's quite bad, so I'll write it up now for clarity...

(Top left drawing) - I remember walking past this guy in the Disney Studios Park quite early on in the day. He was asking a cast member for directions (I didn't draw the cast member as I couldnt specifically remember what he looked like.) The guy was casually holding a cigarette in one hand, map in the other and Minnie mouse ears on his head, completely non-chalent. I thought it was hilarious! :)

(Bottom left drawing) - A cast member in the old hotel uniform for the "Tower of Terror" ride. He was really creepy and cool. You could tell he loved freaking everybody out. He was awesome. He helped me get my fast pass ticket for the ride earlier in the day, and then recognised me and my friend again as we walked onto the ride when it was our turn. (My friend and I were wearing quite distinguishable clothing apparently). He was cool, so I drew him.

(Middle large drawing) - Walking around the park, it was a shock NOT seeing peole putting effort into what they were wearing. It was a sea of black, grey and white clothing!!! How boring!!! It was all very "casual" which I was surprised at. Surely if you knew you were going to Disneyland you would make some sort of effort into having even just a bit more colour in your outfit for the day????!! Apparently not...

This girl stood out in the crowd though. Her outfit was very simple but really chic. A light yellow slightly fluffy knitted jumper, light brown tailored trousers with cute shoes and a short bob of blonde curly hair with Minnie Mouse ears on her head. She was so cool. It was so nice to see! Such a breath of fresh air in a sea of boring clothing!!! I instantly "etched" her in my mind so I could draw her later on.

(Middle bottom drawing) - Little girl probably about 5 or 6 years old. Perfectly blonde, long curly hair and blue eyes. She was wearing the whole Minnie Mouse costume and she looked so cute. White tights, little "Alice In Wonderland" black shoes and the Minnie Mouse red dress with white Polka dots and belt, and of course the Minnie Mouse ears. So sweet!

(Bottom right drawing) - Another little girl wearing a Belle dress. This was about 7:30pm on the day. My friend and I had grabbed a bench to sit down and relax for a few moments. I noticed this family nearby. The little girl (no more than about 8 years old) had just been spoken/shouted at quite loudly by her dad.So she went and sat down on a bit of wall and put her head in her hands and started to cry. I don't know why I remembered it, but I just did. I suppose it's just how children are when they get over-whelmed by having such a fun-filled day. I think she must have been very tired. Poor thing. I think she was better after a few minutes though. It's all very short-lived with children isn't it? (My youngest cousin's favourute tactic for sympathy is "crocodile tears" if he wants anything.)So maybe the little girl was wanting more fo smoething and her dad denied her request? I don't know. Still, the image of her crying in her Belle dress still stuck in my mind. 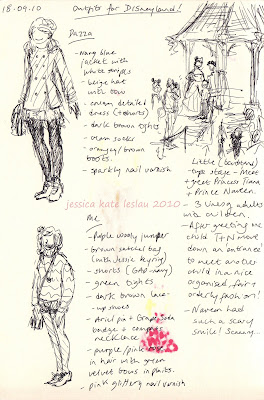 On this page I skecthed myself and my friend's outfits for the day. (I'm the bottom one)

Also, the top right sketch was another remembered moment from Disneyland.
This was on the Main Street USA where, in the centre, they have "Meet and Greet with Princess Tiana and Prince Naveen". There's a white gazebo/band-stand hut (I don't know what it's proper name is) and this is where the characters stand. Three of the sets of stairs that lead up to the gazebo-hut had the parents with their children queuing up infront of them. So three separate queues of parents and chldren. The child would go up, meet Tiana and Naveen, who would then pose for a photo with the child. Once the child's turn was up, they would go back to their family and Tiana and Naveen would automatically walk over to the next "entrance" of the gazebo to await the arrival of the next child. I don't know if that's clear, but it's just how Tiana and Naveen would, still smiling and perfect - all in character, move simultaneouly/robotically to the next "entrance". It seemed quite amusing, so I remembered it and drew it! (Does that make sense?)

But all in all, I had a wonderful day. Tiring, but really wonderful. :)
Posted by jessica kate leslau at 23:28 1 comment:

I've been really inspired by the amazing Mary Blair as of late. I recently received the book; "The Art and Flair of Mary Blair" which is completely inspiring to me at the moment and motivating me to push my style somewhere different.

From painting the box for my friend as seen in my previous post, I decided to paint my "Thank You" card design (I recently turned 20 )for my friends and relatives too.

It doesn't live up to Mary Blair at all, but I was nonetheless inspired by her.

Painted with acrylics
Time: 4-5 hours
Posted by jessica kate leslau at 23:03 No comments:

My dear friend is going to uni tommorow. So I wanted to draw something for her. I found these really fantastic boxes in Paperchase and decided to paint one for her!
If I'd have had more time I would have decorated the whole box...but oh well!

I asked her for her favourite Disney characters, and then designed them and arranged and painted them on the lid of the box! 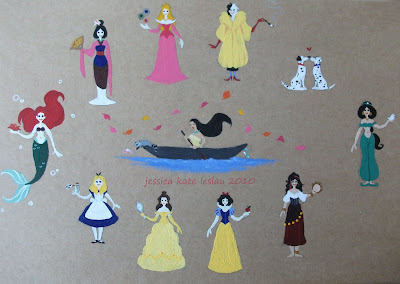 I recently received "The Art and Flair of Mary Blair" book for my birthday, and I am literally in LOVE with it! She's so inspiring. I adore her style as well as herself as a dedicated artist! She's amazing. So she was the inspiration behind the style of the characters I painted on the box :)

It was so much fun. I'm now in a complete painting phase!! - I love it! More will come soon! :D

Also, this is the front/side of the box. I painted a few little things here too.
From left-right: Wagamama Chicken Katsu Curry, shoes, Jason Shwartzman, flowers in a vase. 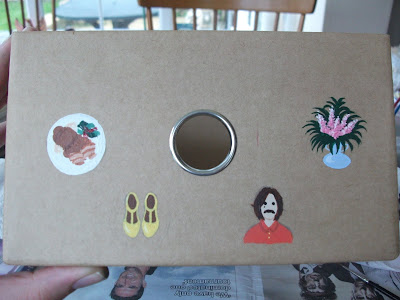 More will come soon!
Posted by jessica kate leslau at 18:25 No comments:

I had to go 'man' the gallery where some of my work was exhibited last month. (mentioned in previous posts) It's a very small gallery, but even so, it was oddly quiet for a Saturday... The day before I had popped in for the last 2 hours it was open and the place was insanely busy!
So on Saturday, I brought along my pad of paper and sketched in quieter moments throughout the day.

I printed some little business cards off too...a few people did take them which was cool. I spoke to one lovely lady who came in with her husband and young child. She said she was an animator herself! We talked for a while, and she said she'd worked on lots of pre-school television animation shows for the UK which was awesome!(Something I definitely wouldn't say no to in the future!) So she took one of my business cards. Her husband was saying stuff to her like "oh you could sort out some work experience..." etc, which was sweet, though I highly doubt anything will come of it seeing as it was somewhat of a 'fleeting' visit. But it was still great to speak with a female animator in the flesh!! Definitely very cool :)

Anyway, the gallery has two large bookshelves filled with art books. I couldn't help but have a nose through some of them. There were a lot of Alphonse Mucha ones, so I drew a few characters on this page which represent his style somewhat...
How great is Alphonse Mucha? So timeless. I will always admire his artwork. 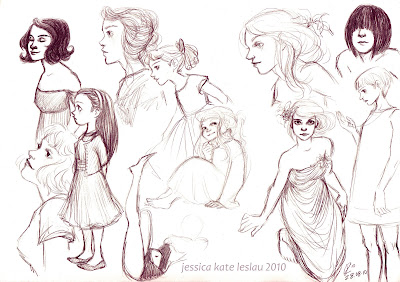 The sketch top-left reminds me of "Phobs"' style on deviantart. (I LOVE how he draws 'noses')

The bottom right one is of Mia Farrow from the film "Rosemary's Baby", which I watched the other night. It's supposedly one of Wes Anderson's favourite films, so my friends and I had to watch it. I liked the amount of yellow used in the film (that was very "Wes" :) )

There's also a little sketch of 'Wendy' from Disney's Peter Pan in there too.
Posted by jessica kate leslau at 00:45 No comments: 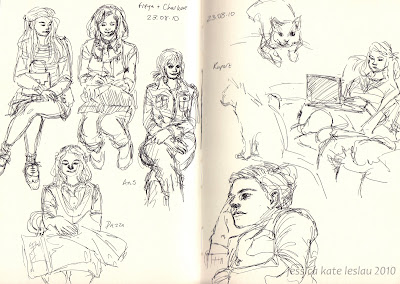 Sketches on the left were drawn on the train to London a few weeks ago.
We went to see "Deathtrap" a new Thriller/Comedy play at the Noel Coward theatre in London. It was really good! We met Jonathan Groff afterwards!! :)

The images on the right-hand side are in my friend's house afterwards on the sofa - and some quick sketches of her cat, Rupert :)
Posted by jessica kate leslau at 13:52 No comments: