Having fun in CS4...Inspired by the magnificent Lorelay Bove and Mary Blair...of course!

Only a screencap...I'm going to try and spend more time on this, I need to develop more patience with Photoshop! :) Click on the image to see it bigger! 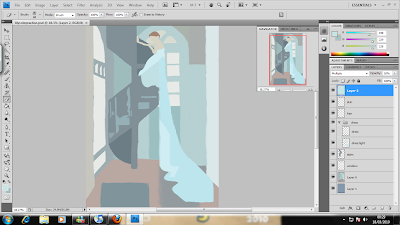 Image inspired from Tim Walker's beautiful photoshoot with Lily Cole in India. (Below) 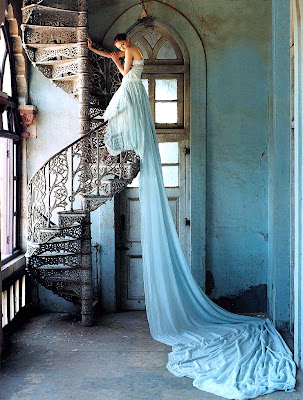 Tim Walker is my favourite photographer, I love his ideas and how everything looks like a dusting of sugar is coating the photos :) They're so beautiful...
Posted by jessica kate leslau at 00:30 No comments:

This weekend just past was a very busy and exciting one. Through my university we have a special programme called "Screen Academy Wales" which we can sign up to if we are a Arts/Film/Media university student studying in a Welsh University. I'm subscribed to the newsletter, and a few months back, this fantastic oppurtunity appealed to me and many other students.

We were able to attend a special screening of the film "Fantastic Mr Fox" at the Atrium in Cardiff (the Arts university building) on Friday the 12th March and then come back the following day to a "masterclass". The day was a long one, but we were able to gain a really fascinating insight into the making of the film with several people from the film such as the line producer, models supervisor and lead storyboard artist (to name a few).

It was seriously amazing and I learnt so much from the day. It was fascinating to see how the industry works "backstage". I mean, I've always watched "behind-the-scenes" footage on DVDs and such, but this was far more intense and detailed than any DVD I've ever watched! There were only abround 50 people there so we were able to ask questions frequently throughout the day which was brilliant.

Out of all the people who talked yesterday I found the lead storyboard artist the most interesting. I was able to take some photos of his storyboards that were up as I arrived at the Atrium, however the woman very kindly asked me not to "publish" these online anywhere which is completely understandable. So I'd love to show them but I can't! :( Christian De Vity the storyboard artist had to reside in Paris when working on "Fox" to be close to Wes' current residence in Paris. It was awesome to hear what he had to say Wes was like as a person. In a brief question-time right at the end of the day we were able to split into small groups and ask specific people questions. I signed up to be able to speak to Chris and asked him "What is Wes like as a person", and other questions concerning Chris' way of working etc.
Chris said that Wes was "a very shy person, very introvert. Compulsive over his work", and that it took "a while for Wes to loosen up around new people due to his shyness", though Chris added jokingly at the end, "He did buy me several dinners in Paris, so maybe he has warmed up to me" (!) :)

Also what I found exciting was that when asking about Wes' style against Chris' he said something about how Wes had a very "2D" mind, which is noticed when looking at Wes' thumbnail sketches on the side of script pages. The drawings are simple but clear-and very "2D". Which is when Chris said, "Wes would do well with a 2D animated film too. He loves Studio Ghibli, I think he'd like to do it". (!!!) I do so hope Wes does one! How amazing would that be!? :D

Chris is also currently working on Tim Burton's new adaptation of his early student film "Frankenweenie". Chris said that he's met Tim and that although he does appear shy on-camera, that actually Tim was mad and excitable on his first meeting with Chris! Which was really cool to hear. :)

Anyway-I was able to grab a few photos from the day! The model supervisor brought some maquettes in which were on a table at the front of the room of a few of the characters. He also brought in a real armature model aswell as a skeleton of one to show what the inside mechanisms looked like.
I'll say now before I forget-There were in total 6 scale model sizes used for the entire film. The smallest being no bigger than a lighter! This one was called a "micro mini fox". IT WAS SO CUTE. I would have payed good money to own it! Unfortunately, again, I have no picture evidence of this as much of the information was shown on the computer screen.

Here's a few photos of the table of models. The guy standing behind the table is Andy Gent, the models supervisor for the film. I think he made the clay models seen here of Boggis, Bunce, Bean and Mr Fox. 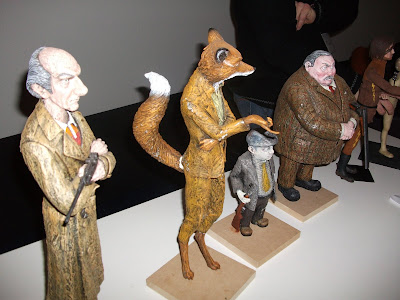 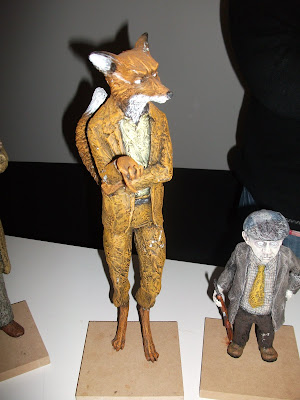 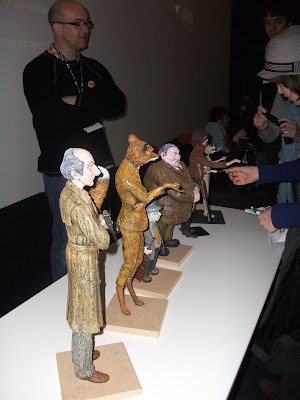 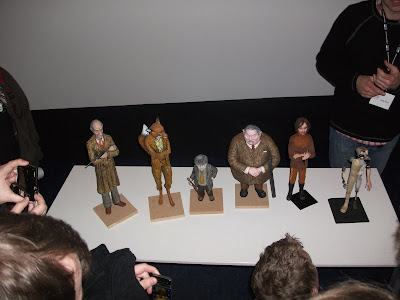 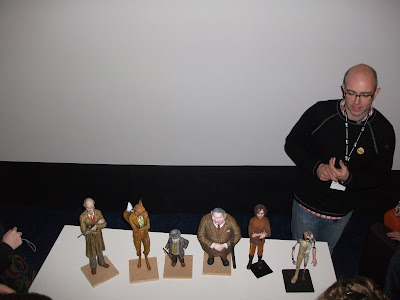 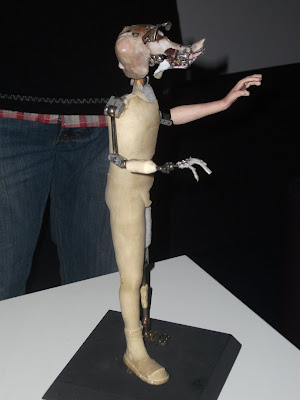 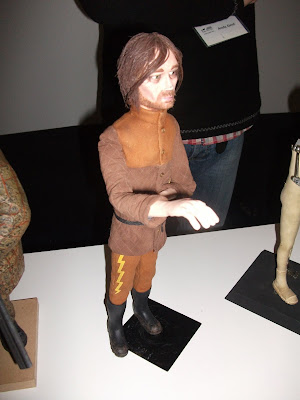 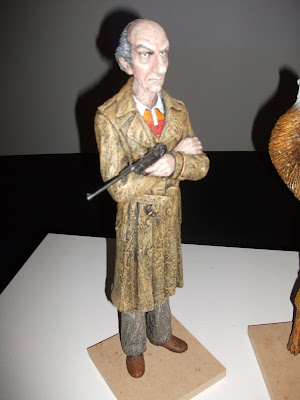 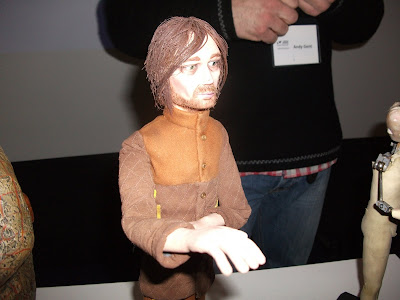 Also throughout the day I was taking notes in my sketchpad. I decided I would draw each and every person from the day too which was fun. It's also great for my memory as I'll always remember what the people looked like. I mean, who knows, I may see them again in the future! So here are my pages of notes/sketches which I took throughout the day. If you are able to read my writing then you will see some cool facts I noted about Wes too. Most of these have a smiley face or a heart drawn next to them as they made me smile :) Click on the images to make them large so you can read/see them properly! 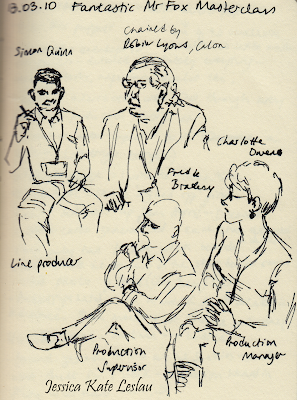 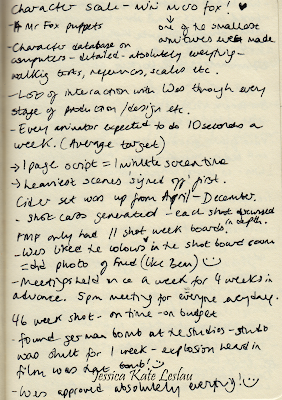 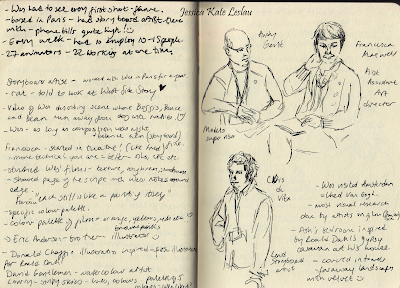 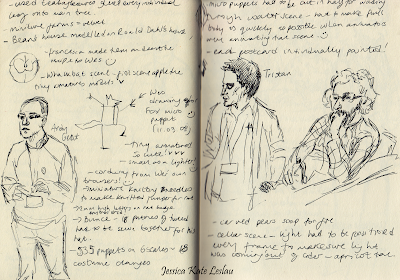 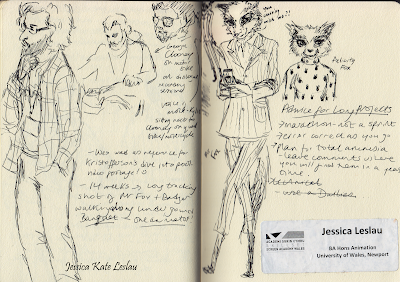 As some people know, I live in the town next to where Roald Dahl lived with his wife in Buckinghamshire. And a few years ago I also worked at the Roald Dahl Museum and Story Centre based there. So, inevitably, I knew a lot of the "hidden" meanings shown throughout the film that Roadl Dahl fans would most likely know! For instance, the chair that Mr Fox sits in when discussing his "master plan" with Badger is an exact model replica of the chair Roald Dahl would sit in (along with the wooden board) to write his wonderful stories. (Shown below) 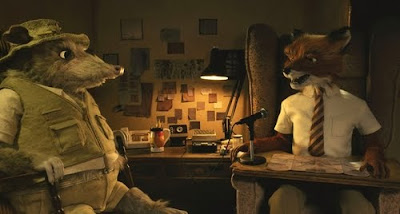 Wes' style of film-making always interprets these fine details which make the film's significance much greater when compared to other film adaptations by other directors. Wes' beautiful sense of composition, layout, timing and script create the essence and heart of the film which really gives Dahl's story a beautiful and stylistic edge. Wonderful Wes! :)

Overall, it was an exhausting but extraordinarily fantastic weekend. I learnt so much and the masterclass on the Saturday left me buzzing with excitement at the prospects of working in this industry!

On the birth of my new baby cousin, Sura; I decided to draw a card for her :) 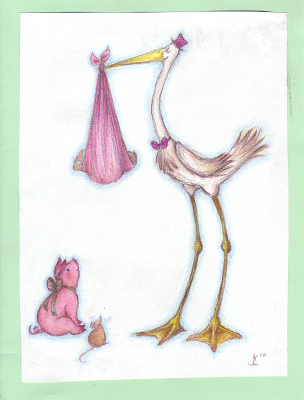 Posted by jessica kate leslau at 12:28 No comments:

Here is a link to my Youtube channel. I've uploaded some of my animations I've done over my course. I uploaded 6 new videos yesterday which show my latest Character Performance module.
They all need a bit of tweaking, but I'm learning so much every time I do each animation. It's exhausting but exciting!