I had a brainwave a few months back now concerning Disney Princess-related fanart. I've always loved seeing the many ideas people come up with for this area of fanart...Deviantart being notable for a lot of great pieces!

I was trying to think of what I would like to see Disney Princess' doing. I've always loved watching anything "Behind The Scenes". Literally---I don't even mind if it's a retarded rap artist's behind-the-scenes music video; I will be compelled to watch it. It just interests me.

So I got thinking. With the Disney Princess merchandise so popular (and amazing) I was thinking of the Disney female characters in a "behind-the-scenes" situation.
Initially, I was thinking of drawing the princess' all in their dressing rooms getting ready for their "photoshoot" (the merchandise pictures being their resulting photos if you understand what I'm on about?)

This idea then led on to the surrounding images around the edge of the page (shown below). Being a HUGE fan of the Menken musical renaissance in Disney films, I was thinking it'd be fun if I were to draw each princess in a sound booth recording "their" songs for "their" movies...This idea excited me. This then led to another idea---why not draw the princess' in the trends of the time their film was released? So Ariel; for example; "The Little Mermaid" came out in 1989 so I draw Ariel in late 80s American style clothes! And Belle and Jasmine in early 90s, Sleeping Beauty in late 50s etc etc etc! (You get the idea) :) 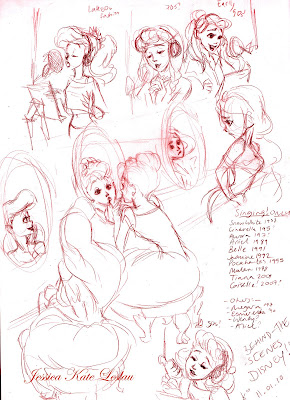 This idea excited me greatly. So I hastened to design some poses I could get for the princess' in their sound booths singing their hearts out!
Here I focus on Ariel :) 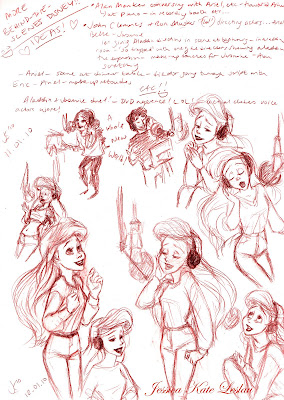 Here are some more poses in miniature---This time, with most of the princess' I will eventually draw! I was trying to think of layouts for how I would create this illustration too...This is present at the top of the page---It's all very rough work! 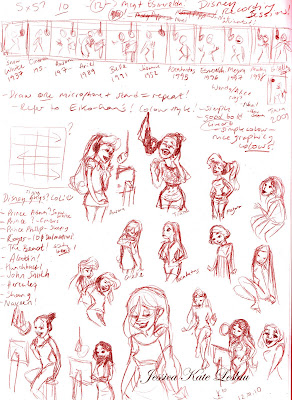 This next page is a layout idea. 6 boxes to a page. Drawing the princess' singing in each box, different poses for each character. Again...this is just rough work- Trying different approaches to drawing "singing" poses for each female character. I will be researching clothing styles and trends later on :) 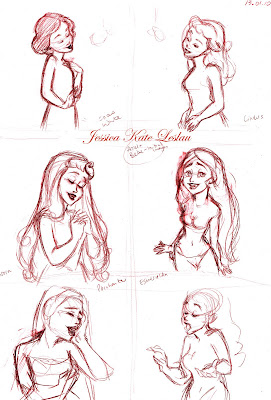 A rough sketch page of possible singing poses. Trying to draw the whole figure to get the gesture right. Random sketch of woman was from an advert I was watching at the time. She was really pretty so I decided to sketch her quickly :) 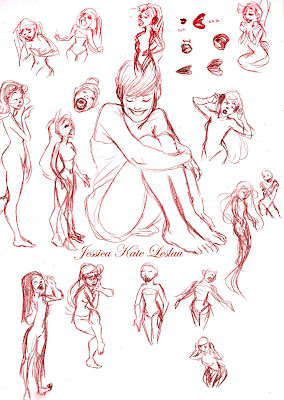 Last page! Done more recently. This was slightly unrelated to the "singing princess'" in that I was just trying to give the princess' a 50s swimmer-style figure for fun. Another extension of this could be a modern-day "fashion-photoshoot" with the Disney princess' (and possibly princes') drawn in a realistic photoshoot style as seen in Vogue, Elle and other fashion magazines...:) 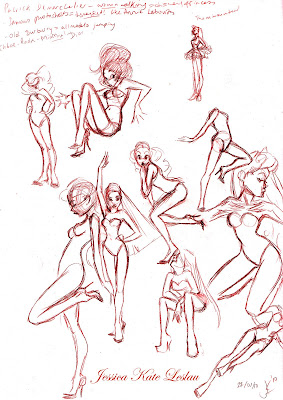 So I had to completely re-design my character for my uni project...My worst fears were realised---the characters I had designed before (see previous post) were way too complicated and uninteresting! I had a chat with my tutor and we decided I'd be better off animating a simpler design...

My main inspiration for my "new" character is the artist Lorelay Bove...I absolutely adore her artwork and am so inspired by her and her style that I wanted to incorporate her inspiring sense of design into my own characters :)
She truly is wonderful :) As I follow Bove's blog on here, I've noticed she has an etsy account and am really tempted to buy smething of hers...the price is really quite good...hopefully shipping won't be too much :S
She's also inspired me to work with acrylics which I hoep to do at some point when I get time! I miss painting with acrylics...so much fun:)

So this is a relatively quick design of (renamed) "Fifi Bernadette" inspired by the wonderful and amazingly talented Lorelay Bove... 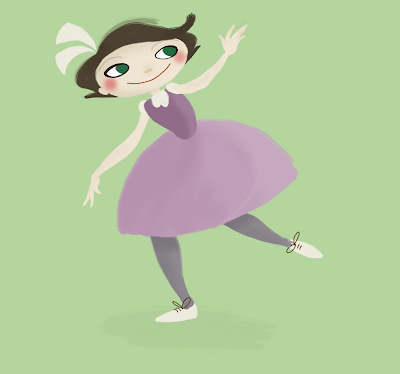 There will be more sketches soon of her and "Peppin" the fox--all re-designed! I'll also be uploading their walk and run cycles too so will give links on here to my Youtube account :)

As described in the previous post, I am doing a new project at uni which is to design a human and animal character to animate over the next 11 weeks here at uni...
I've done a whole load of drawings...but after speaking to my tutor, I'm trying to simplify my "final" design to make it easier for when I start animating :)
So here's some sketches I've produced over the last week... 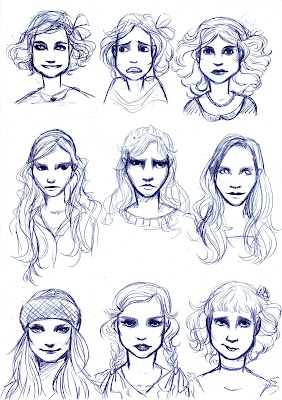 Stylized practise...Trying out different styles of character depiction...Some were inspired by Lorelay Bove (who I follow on here ) I love her work. I'm trying to simplify my characters leaning more towards her style :) 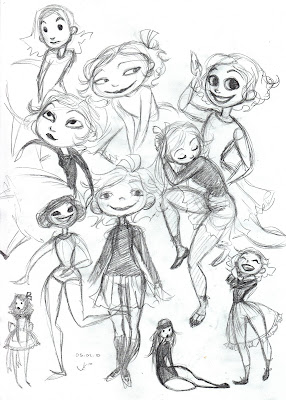 Found little characteristics I liked to draw and continuing developing the character's appearance...Tim Burton eyes are a go-go :) 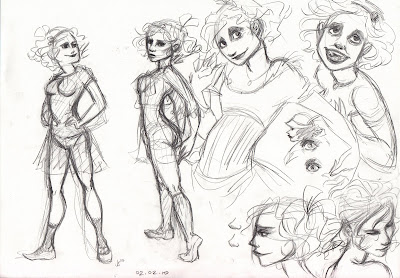 (There are more development pages between this and the image before but I can't be bothered to upload them...They're not great really.)
Drawings to find my character's personality and some facial expressions experimentation... 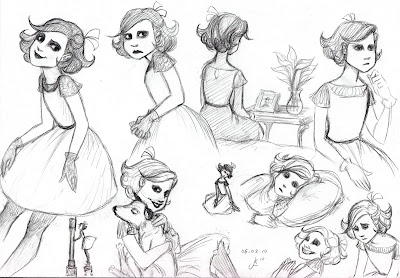 An expressions page :) This was fun to do :) 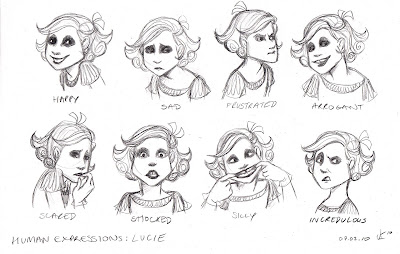 Now for some animal sketch designs! I wanted to do a fox (we had to choose a four-legged animal) :D Foxes are cool :) I found reference videos on Youtube which were a great help :) I don't usually draw animals, but this was really fun, I want to draw more definitely :) 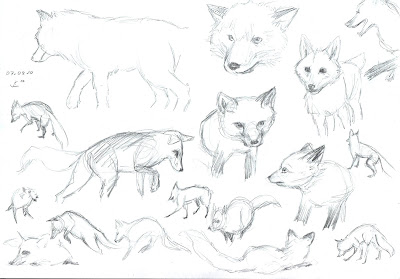 Some more fox sketches... I also put my character (Lucie Bernadette--She's French ) in some of the poses with the foxes... The one where Lucie is carrying the fox (whose name is Peppin btw; also French ) the pose was based on a scene from Disney's "The Rescuers" where Penny is carrying the cat *can't remember his name as has only seen this film once when I was very very young :(* I remembered that scene for some odd reason and wanted to super-impose my characters over that shown in the film as I can imagine Lucie carrying little Peppin like this :) 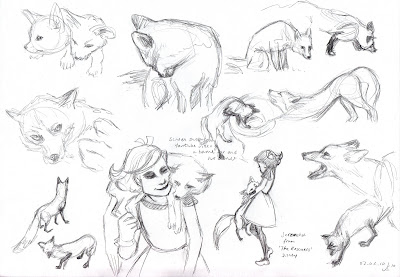 Blew up this little image from the previous one as it really shows my two characters well (even though little Peppin isn't developed character-wise here at all) I still likes it :)---The pose was taken from a Youtube video in which this man had taken in this old, sweet fox and had grown attached to it! :) It was so sweet! *really wants a pet fox now plz*
The man carried the fox around like this when the fox was tired! Aww! :) 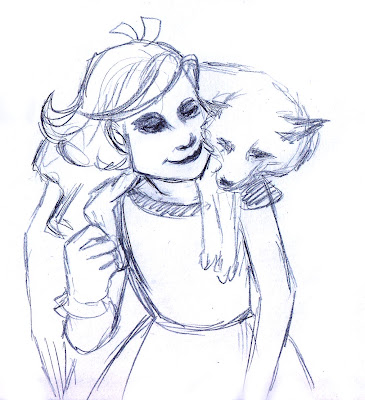 Developing fox design...These next pages are getting very "Disney" :( I need to go back and re-design/simplify them...Plus it'll be way too hard to animate:P
I'll upload them anyway :) 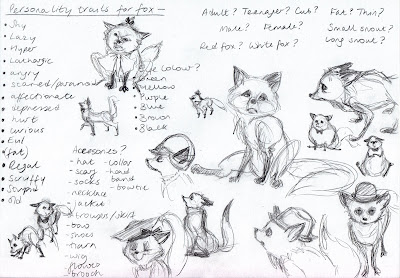 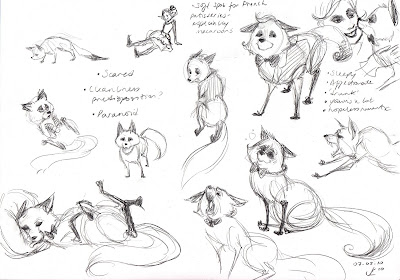 And finally...another expressions page for Peppin :)
He's looking very much like the fox from "The Fox and the Hound" ... (again, another film I literally have not seen in years and years so fails at name recall :P )
I was merely making my characters have similar eyes (gothicy dark shading around eye sockets) though, obviously, this is just way too "Disney"...I have to really simplify this one down :( Poor Peppin~~~Don't worry, I'll keep your little bow tie intact! :) 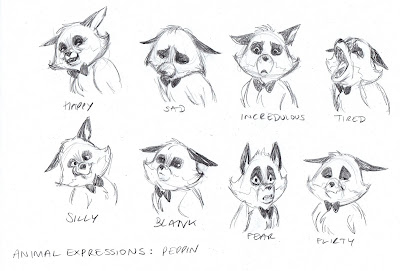 Whew...Long post, but there we go...A few images that I've been working on over this past week! *which I now have to go and redesign* D: Oh well.

I still haven't forgot about my Disney project mentioned a few posts ago! I'll attempt to start it once my workload eases off a bit...I have 4 animations to do by Monday...O____O *chugs down coffee* 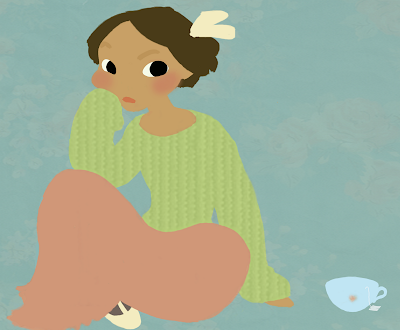 As part of our most recent uni project brief...To design our very own character!!! :D
I've been looking at tonnes of images for inspiration...and this is just a very initial rough design idea! I want to try a simple style...and make the character wear pretty clothes...I still have a lot to uncover...just thought I'd post this for funsies:) This is nowhere near the final design!
I think I'll draw the designs on paper now though, I don't work quickly in Photoshop...! :P
This style is very reminiscent of Disney concept art which we're supposed to be steering away from....and gah! I hate PS7!! It's so jolty and horrid! D: Blergh! I want smooth lines...D:
Dammit.

X
Posted by jessica kate leslau at 19:23 No comments:

For some reason, this won't upload on Deviantart :(
Stupid computer! *spouts fire*

Yet another Ariel sketch! (yay) :)
Had a drawing session with a few friends and ended up drawing this! I quite like the way her face came out....I wish I was able to sketch a bit neater though...:/
I enjoyed smudging and erasing parts out for lighting. I played about in Photoshop using the Levels, and a "sepia" tone emerged which I really liked, and therefore stuck with! :D

I hope I can fix whatever it is stopping me from uploading this on the dA...I want to put a "critique" option on it possibly...:P 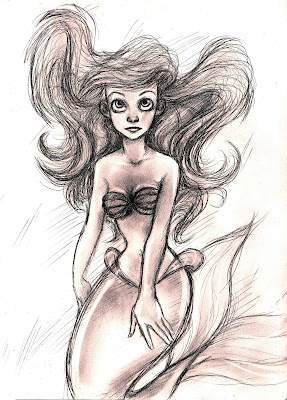 Posted by jessica kate leslau at 01:11 No comments: