Today I went to my younger cousins' Primary school for their annual May Fair. There are lots of stalls and this year I was able to have my own stall where I could sketch some of the attendees! 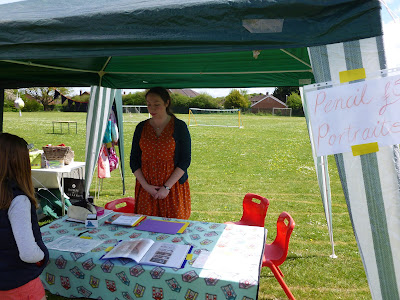 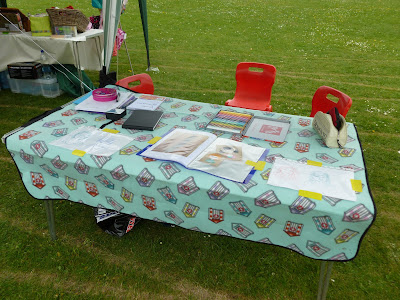 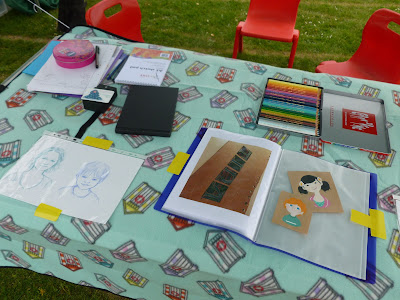 It was such a great day, although the weather took a turn for the worse (as to be expected in England). So although it started bright sunny and very windy (note the yellow stickers holding everything in place), it ended cold, rainy and windy by the end of the fair.

The kids were so sweet. They were between 4 and 8 years old, and they were just the greatest sitters! Conversation-wise, we covered most things, from favourite animals, favourite school subjects to favourite TV programmes. (Two girls in particular were really knowledgeable and had some really insightful thoughts on Doctor Who! Seriously, they were really intelligent.. I was intimidated...)

So all in all, it was a terrific day. I wasn't able to take any photos of the sketches I completed, as I didn't have enough time! (There was a constant queue of kids so I couldn't really stop to fuss with a camera) But at the end of the fair, my stall was the last one to be disassembled, and unfortunately I missed out on drawing three kids (One of which started to cry, bless her!) Though hopefully I will be able to draw them again at the school's Pre-School Fair which I will be attending in July. I also gave the little girl who was upset one of my business cards which seemed to cheer her up :)

A good few people took my business cards and sounded interested in commissions, which would be fantastic too.

Absolutely knackered by the end of it, but what a great time I had!

Thanks to all the kids who sat for me! You were awesome! :)